REVIEW: Made by J.M. Darhower 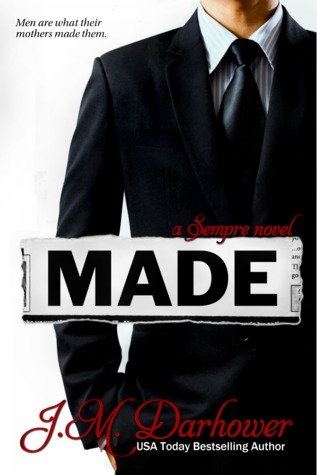 The world knows the notorious Kevlar Killer, but few have ever seen what lies beneath his armor. The abused child. The neglected teenager. The broken man. He always did whatever he had to do in order to survive.

It's kill or be killed.

Throughout his life, he has been there in the shadows, a witness to everything from beginning to end. Bound by loyalty and honor, there's only one thing he would sacrifice it all for: family.

Never get close. Never get attached. It's a lesson that has been brutally pounded into him since childhood, but they're words the DeMarcos make it difficult for him to follow. Through them he finds love and grieves loss, realizing the world isn't quite as black and white as it's made out to be.

What events shaped Corrado Moretti's life and created this singular individual and dedicated husband he is in the present? How one becomes the best hitman and fearful member of powerful La Cosa Nostra? MADE is prosaic biography of Corrado Moretti and it will give you all the answers that fans of Forever series have been waiting for.

Corrado's upbringing was a harsh one. No love, no understanding. Just cold and cruel reality of dysfunctional mafia family. All he ever knew was world where emotions and attachments have no place. "Kill or be killed" was the main motto he learnt to follow as he grew older. However, Corrado never pitted himself and I love that about him. I love how he always found the way to cope no matter what he encountered. And most of all, I love that author never romanticized Corrado. She showed us his true self, his deepest darkest thoughts but let readers to form their own opinion. But let me tell you something. If loving Corrado Moretti is wrong than I never want to be right.

My favorite part of this book was probably Corrado's teenage years. His beginnings in La Cosa Nostra, his attempts to live "outside the box" that he so strictly created for himself and falling in love with Boss's daughter. MADE is fascinating, captivating and overall very addictive read. The best mafia story I have ever read. I know I said the same thing about Sempre duet but all three books are spectacular in their own way. It is hard to compare them because while Forever series is emotional suspenseful family saga, MADE is memoir of true mafia member whose story you won't be able to put down once you start reading it.

I'm not afraid to go as far as saying that this is J.M. Darhower at her best. No matter how much I love Sempre duet, Corrado Moretti will always be my favorite and I'm glad to say that in my eyes, Mrs. Darhower did his story a justice.

Lucia is 29 years old passionate reader and reviewer who enjoys talking about all bookish things. Currently she lives in Prague, works in business industry and dreams of starting her own publishing company. Her weakness? She can never say no to cake, coffee or good novel.
Email ThisBlogThis!Share to TwitterShare to FacebookShare to Pinterest
Štítky: contemporary, must-read, romance, standalone, suspense