REVIEW: CARRY ON BY RAINBOW ROWELL 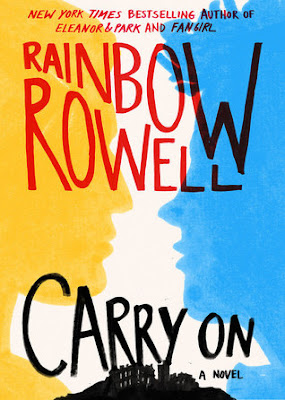 Carry On by Rainbow Rowell

Rainbow Rowell continues to break boundaries with Carry On, an epic fantasy following the triumphs and heartaches of Simon and Baz from her beloved bestseller Fangirl.

Simon Snow just wants to relax and savor his last year at the Watford School of Magicks, but no one will let him. His girlfriend broke up with him, his best friend is a pest, and his mentor keeps trying to hide him away in the mountains where maybe he’ll be safe. Simon can’t even enjoy the fact that his roommate and longtime nemesis is missing, because he can’t stop worrying about the evil git. Plus there are ghosts. And vampires. And actual evil things trying to shut Simon down. When you’re the most powerful magician the world has ever known, you never get to relax and savor anything.

Carry On is a ghost story, a love story, a mystery and a melodrama. It has just as much kissing and talking as you’d expect from a Rainbow Rowell story — but far, far more monsters. 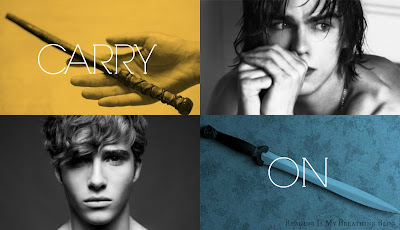 What is this novel about? I think that you need to read Fangirl to truly understand Rainbow Rowell's inspiration behind this novel. Carry On is fictional story based on fictional fanfiction character (from Fangirl) which was inspired by fanfiction of real-life-famous fictional series (Harry Potter). Confusing, right? That's why I recommend reading Fangirl first because I don't think that Carry On stands on its own.

This book was a big challenge for me. I don't read M/M books so I took a risk reading this one. But Carry On is so much more than just M/M book (romance is not the only focus of the story). I was sooo extremely curious to find out more about Simon & Baz after reading Fangirl that I simply could not resist this book. All the tension between Simon & Baz and enemies-to-lovers trope worked perfectly in this case and I truly enjoyed myself. Sad thing is that we get to experience the pining on the Baz's side (book has multiple POVs) but we don't get to see how Baz fell in love...

Which leads me to another thing - storytelling. It took me very long time until characters grew on me. Was it because I was thrown basically in the middle of the story (end of "series") and didn't have time to properly build personal relationship with Simon and other characters? Fortunately, all three main characters were complex and interesting enough and eventually, they won me over. Also, banters were a lot of fun which is always a big plus for me!

Carry On has its minuses as well. It is character driven story which generally speaking I have no problem with. However, when reading Carry On, I kept wishing for more action which I love in fantasy/paranormal novels. But when it comes to a big picture, I have to admit that after reading Fangirl and Carry On I'm finally becoming fond of Rainbow Rowell's writing style and I do hope she decides to write more fantasy oriented books in the future. Recommended.

Lucia is 29 years old passionate reader and reviewer who enjoys talking about all bookish things. Currently she lives in Prague, works in business industry and dreams of starting her own publishing company. Her weakness? She can never say no to cake, coffee or good novel.
Email ThisBlogThis!Share to TwitterShare to FacebookShare to Pinterest
Štítky: fantasy, paranormal, YA
REVIEW: CARRY ON BY RAINBOW ROWELL
2015-10-09T00:30:00+02:00
Lucia @Reading Is My Breathing
fantasy|paranormal|YA|
Newer Post Older Post Home
Subscribe to: Post Comments (Atom)