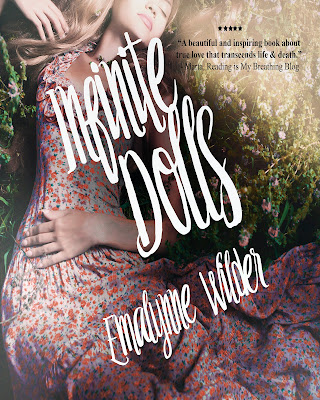 There was a riot in my heart.
It needed to be heard.

~
Everly Brighton's expected to die before her twenty-first birthday, at the hands of a rare medical condition. Under the watchful eye of her father more is being stolen from her than years. Everly longs for connection and freedom she has never been allowed due to her dad's controlling routine. Time ticking away she begins to defy his rules and make up her own.

One star-crossed meeting grants Everly her greatest desire when she befriends Callum Trovatto, a grief-stricken med student needful of his own blissful upswing in the wake of his mother's death.

When Everly becomes the center of Callum’s class assignment, their fate is tested, as they try to awaken their true selves with the infinite promise of friendship, renewal of faith, and an unexpected love that shakes the charade forever.

INFINITE DOLLS is a story of grief, faith, and how the power of deep-rooted love encourages living in the preciousness of Now. 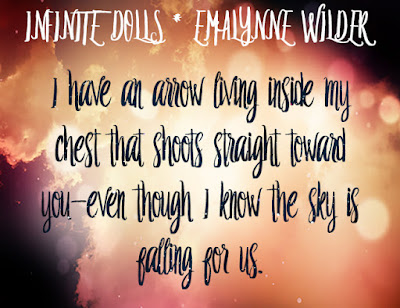 
Infinite Dolls is a story unique in its kind. I’ve had the pleasure of getting to read this way ahead of publication date and, ever since, I’ve been excited for everyone else to read it too. It’s why I am, once again, happily invading Lucia’s blog to share my thoughts with you all.

For all of you readers who like sweet and sassy heroines, and for all of you readers who love caring heroes, I have some good news, because this book has both. Everly is sassy and unattainable on the outside, but sweet and a bit afraid on the inside. Callum is the kind of man every father should want his daughter to date. He has darkness inside of him, but he’s genuine, caring and understanding. And where you might think this book is Everly’s story, it’s not. It’s actually entirely written in Callum’s point of view.

This book is Callum Trovatto’s story about his one and true love, Everly Anne, who has taught him to hope and believe.

The only way she wasn’t beautiful was when she was hopeless.

I had an abnormal heart, the kind that stretched like a rubber-band and weakened with every tug I allowed someone to have.


This book is different from others that deal with fatal illnesses, in that it doesn’t focus on Everly or her disease. It’s there, but this book is mainly Callum’s story. It’s about the color that Everly brought into his life after the death of his mother left a black spot. It’s about him knowing he will lose her at one point in the future, but choosing to experience the color regardless, and trying to find ways to maintain it when she’s gone. They’re star-crossed, their stars are going to fall, but would you rather avoid love in order to avoid pain? Or feel love and take the pain as proof?

Something in my spirit had changed, something so large that I had been woken up, that night, by a sleeping girl.


This is a beautiful and inspiring book about true love that transcends life & death and lives in a sky full of stars. A book about fate and having faith. About finding peace and living while keeping her alive as long as you can. A paradox, because if living is what's going to kill you, would you prefer to be dead?

Lucia is 29 years old passionate reader and reviewer who enjoys talking about all bookish things. Currently she lives in Prague, works in business industry and dreams of starting her own publishing company. Her weakness? She can never say no to cake, coffee or good novel.
Email ThisBlogThis!Share to TwitterShare to FacebookShare to Pinterest
Štítky: contemporary, guest review
GUEST REVIEW: Infinite Dolls by Emalynne Wilder
2015-06-07T08:00:00+02:00
Lucia @Reading Is My Breathing
contemporary|guest review|
Newer Post Older Post Home
Subscribe to: Post Comments (Atom)