REVIEW: The Raven by Sylvain Reynard

From the New York Times bestselling author of the Gabriel Series comes a dark, sensual tale of romance in a city shrouded in mystery…

Raven Wood spends her days at Florence’s Uffizi Gallery restoring fine works of Renaissance art. But an innocent walk home after an evening with friends changes her life forever. When she intervenes in the senseless beating of a homeless man, his attackers turn on her, dragging her into an alley. Raven is only semi-conscious when their assault is interrupted by a cacophony of growls followed by her attacker’s screams. Mercifully, she blacks out, but not before catching a glimpse of a shadowy figure who whispers to her…

When Raven awakes, she is inexplicably changed. She returns to the Uffizi, but no one recognizes her and more disturbingly, she discovers that she’s been absent an entire week. With no recollection of the events leading up to her disappearance, Raven also learns that her absence coincides with one of the largest robberies in Uffizi history – the theft of a set of priceless Botticelli illustrations. When the baffled police force identifies her as its prime suspect, Raven is desperate to clear her name. She seeks out one of Florence’s wealthiest and elusive men in an attempt to uncover the truth about her disappearance. Their encounter leads Raven to a dark underworld whose inhabitants kill to keep their secrets…

Vampire novels always bring this special kind of excitement with them. Because even though there are general rules about vampires (drinking blood and supernatural abilities), every author brings something new in his/her portrayal of these paranormal creatures. And I was very excited to discover Sylvain Reynard's unique take at vampires. Will he present sparkling vampires (Twilight), traditional ones who cannot enter house until they are invited (Sookie Stackhouse) or complex troubled and family oriented ones (All Souls Trilogy)? I am not going to spoil this for you but I have to say that result was very satisfying. 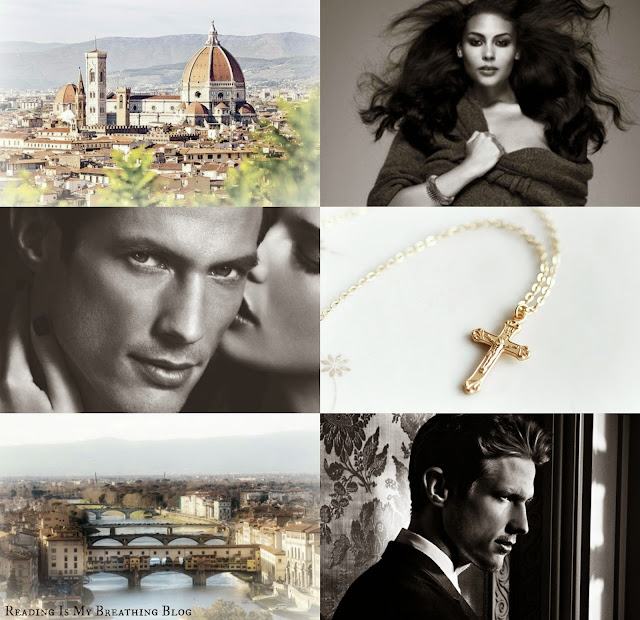 It's not a secret that I'm huge fan of Sylvain Reynard's writing based on my love for his Gabriel's Inferno series. His writing style is distinctive, flawless and lyrical. And it was all proved once again in this novel.

Even within paranormal genre, Sylvain Reynard pursues profound topics and offers his readers plenty of things to think about. This is exactly what distinguishes Sylvain Reynard's novels from other novels and what makes him one of my favorite authors.

However, I didn't end up being connected to and touched by these characters as I hoped I would. Author didn't provide enough information about nature of main protagonists so some actions and decisions made by the Prince and Raven seemed to be out of their character and disrupted the flow of the story. Overall, characters development felt somehow unnatural and never properly explained. Worst of all, second part of the book focused heavily on romance and I just found it weak and unsatisfactory. It lacked chemistry and the kind of intensity that would make me cheer for the couple.

But all my issues aside, I liked mysterious and supernatural aspects of this book. It was enjoyable read and I definitely plan on reading the sequel.

WARNING: The Raven contains HUGE spoilers from Gabriel's Inferno series. So if you haven't read this series yet and plan to do so in the future, I would suggest staying away from The Florentine series for now.


*ARC provided by publisher as an exchange for honest review*

Lucia is 29 years old passionate reader and reviewer who enjoys talking about all bookish things. Currently she lives in Prague, works in business industry and dreams of starting her own publishing company. Her weakness? She can never say no to cake, coffee or good novel.
Email ThisBlogThis!Share to TwitterShare to FacebookShare to Pinterest
Štítky: paranormal, romance
REVIEW: The Raven by Sylvain Reynard
2015-02-03T08:00:00+01:00
Lucia @Reading Is My Breathing
paranormal|romance|
Newer Post Older Post Home
Subscribe to: Post Comments (Atom)