REVIEW: Only The Good Die Young by K.K. Hendin 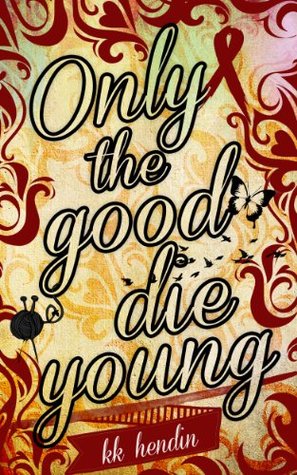 Only The Good Die Young by K.K. Hendin

The first year of college is supposed to be about parties, parties, and getting the hell out of Texas. Instead, Milcah Daniels is spending her eighteenth year in and out of Houston's hospitals. Her hair is falling out, they’ve cut off her boobs, and if she makes it to nineteen, she’ll consider it a personal miracle.

Breast cancer really has a way of messing with a girl’s social calendar.

When Milcah’s temporarily discharged from the hospital, she’s determined to get a tattoo for every medical procedure she’s had. Her quest leads her to Skin Stories, a new tattoo parlor a block from her apartment. And to it’s infuriatingly sexy artist, Callum Scott.

Callum is everything Milcah wants, and everything she shouldn’t have now. A new relationship when the official prognosis is one to five years is a terrible idea. But Callum doesn’t know about the breast cancer, and Milcah’s not running to tell him.

But when the doctor says things are actually looking positive, her entire life turns upside down. How is she supposed to start living again when she’s finally learned to accept her death?

This is a story about girl who lost will to fight for her life, a girl who became bitter person waiting for her death. But what happens when things change? When she meets someone who doesn’t fall for her pretenses?

"Why he has to show up in my life now - at the same time where I can handle him the least but need him the most."

Only The Good Die Young is very depressive book. Heroine (Milcah) is not only fighting with cancer, but she is going through everything all alone. Milcah was alienating herself from everyone, pushing all who cared about her away from her. It was heartbreaking to witness it, but also realistically written.

This book brought up many emotions when I started reading it. But I kept asking myself - was it the topic itself that made me so emotional while reading this book? I was hurting for Milcah, but was it honestly because of the writing style? Or was it because I am human and would be hurting for everyone in the similar situation, no matter who wrote the book? The answer is that I don’t really care in this case. Maybe I wasn’t impressed with the writing style, but I was still touched my Milcah’s story.

However, story lost its momentum in second half. I was expecting something epic after intense and emotional first half and it never happened. Even though this is a standalone, story left me hanging, feeling unfulfilled. Stories about characters with cancer are very tricky. Only The Good Die Young did not disappoint, but it did not make some kind of unforgettable impression either.

Lucia is 29 years old passionate reader and reviewer who enjoys talking about all bookish things. Currently she lives in Prague, works in business industry and dreams of starting her own publishing company. Her weakness? She can never say no to cake, coffee or good novel.
Email ThisBlogThis!Share to TwitterShare to FacebookShare to Pinterest
Štítky: angst, new-adult, romance
REVIEW: Only The Good Die Young by K.K. Hendin
2014-03-18T14:00:00+01:00
Lucia @Reading Is My Breathing
angst|new-adult|romance|
Newer Post Older Post Home
Subscribe to: Post Comments (Atom)