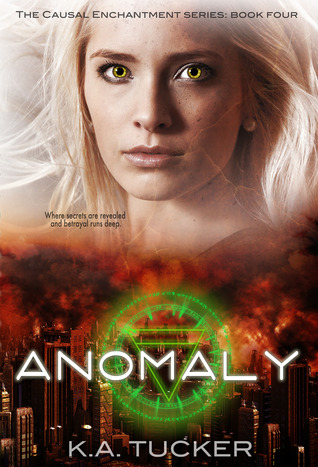 She was merely a pawn in their game.
And then something happened.
Once the fragile, naïve human, Evangeline has become altogether … different.
A being who holds formidable power, she may be the key to changing the course of fate.
Or she could be the final nail in the world’s coffin.
But Evangeline doesn’t know exactly what she is, what she can do. She knows only that she has to stop an enemy far worse than the Sentinel and the sorceresses—one driven by revenge.
And he’s hunting the man she loves.
As Evangeline fights to keep Caden alive and the human population from eradication, she can’t help but sense the imminent doom.
Find out if fate will prevail in the harrowing conclusion to the Causal Enchantment series.

My Evangeline and Sophie:

Anomaly (as well as whole Casual Enchantment series) is action-packed novel, full of twists that kept me guessing till the very end. The world author built in this series is without the doubt one of the most unique and fascinating things I have came across within YA fantasy genre to the date. Written in dual POV of Evangeline and Sophie, Anomaly is a must read for all fans of this exciting series!

"There are only so many impossible decisions one being can make before the weight becomes to much."

Sophie is the most tragic character in this series and definitely my favourite one. Author potrayed her despair and turmoils perfectly in this book and I could not help myself but be Sophie’s biggest fan. She is my "hero" of this series and I was so glad I was able to see things through her eyes in this instalment.

So why not 5 stars? I expected Evie to mature, to change mentally. But she didn’t. And while her naivité was charming at the beginning of the series; now, when there was whole world and innocents lives at stake, it was very annoying. In series, I expect characters to change a little bit, to grow one way or another. Not doing the same mistakes over again, hoping some higher power will solve it at the end.

But beside this minor complain, I enjoyed conclucion to Casual Enchantment series immensely. I really hope K.A. Tucker decide to venture into this paranormal/fantsay genre again in the future.

Lucia is 29 years old passionate reader and reviewer who enjoys talking about all bookish things. Currently she lives in Prague, works in business industry and dreams of starting her own publishing company. Her weakness? She can never say no to cake, coffee or good novel.
Email ThisBlogThis!Share to TwitterShare to FacebookShare to Pinterest
Štítky: fantasy, paranormal, YA
BLOG TOUR REVIEW: Anomaly by K.A. Tucker
2014-03-08T14:00:00+01:00
Lucia @Reading Is My Breathing
fantasy|paranormal|YA|
Newer Post Older Post Home
Subscribe to: Post Comments (Atom)