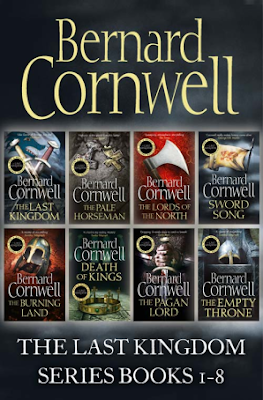 Boook #9 - Warriors of the Storm

I had a super long review written for this series but I deleted the document accidentally so let me share with you at least some major points to explain my reasons for loving this series so much:

* Unforgettable narrator. Uhtred of Bebbanburg is unapologetic and ruthless yet lovable and admiration worthy character with brilliant military strategic mind. He is a true hero!

* Complex and fascinating side characters that you will love to come back to.

* Constant philosophical battle between paganism and Christianity that depicts given period precisely.

* War and fight scenes are chillingly realistic. I really felt like I was there with Uhtred, fighting every new enemy or being part of countless shield wars.

Moreover, I loved author’s note at the end of every book where author explained which parts were based on historical facts and which parts of his novel he made up.

WHAT IS YOUR FAVORITE HISTORICAL SERIES?

Lucia is 29 years old passionate reader and reviewer who enjoys talking about all bookish things. Currently she lives in Prague, works in business industry and dreams of starting her own publishing company. Her weakness? She can never say no to cake, coffee or good novel.
Email ThisBlogThis!Share to TwitterShare to FacebookShare to Pinterest
Štítky: completed series, history, must-read
NO MORE WAITING #9: THE SAXON STORIES
2017-06-30T12:00:00+02:00
Lucia @Reading Is My Breathing
completed series|history|must-read|
Newer Post Older Post Home
Subscribe to: Post Comments (Atom)