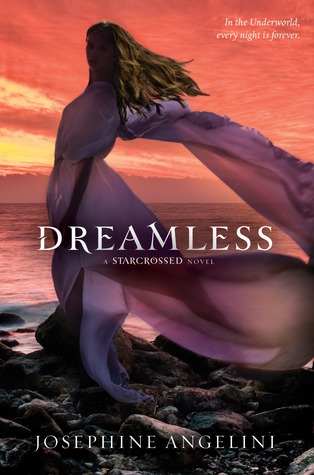 StarHearts, as fans of Josephine Angelini call themselves, will stay up all night reading Dreamless, the second book in the bestselling Starcrossed series. The saga mixes mythology, romance, action, and intrigue in a completely original way.

Dreamless continues the story of Helen Hamilton, a shy girl living on Nantucket Island whose desire for an ordinary life was thwarted when she discovered she is a Scion, a descendant of a Greek god and a mortal. Each Scion has a power, and Helen’s is the ability to travel to Hades.

Helen is determined to use her talent to stop a war amongst the gods and change her destiny, which is to live a life patterned after that of the tragic Helen of Troy. But her quest may cost her Lucas Delios, the boy she loves.

My Lucas, Helen and Orion:


Everything I liked in first book was not present in this instalment. Moreover, author introduced new character and created love triangle. A big no-no for me!

This book is excellent example of how to ruin series which had plenty of potential. So what would I recommend not to do?

*Take away banters and interactions between hero and heroine which were the most interesting part of book #1 and which made this series special.

*Create love triangle in which heroine is so pathetic that she leads on both guys.

*Add over-done Greek mythology which is forced and sometimes even does not make sence.

I was thinking of DNF-ing this book numerous times. I forced myself to finish but I did not enjoy it. And now I do not care what is going to happen or with whom heroine is going to end up with. I am very disappointed since I liked first book a lot and now I decided not to even be bothered to finish this series.

Lucia is 29 years old passionate reader and reviewer who enjoys talking about all bookish things. Currently she lives in Prague, works in business industry and dreams of starting her own publishing company. Her weakness? She can never say no to cake, coffee or good novel.
Email ThisBlogThis!Share to TwitterShare to FacebookShare to Pinterest
Štítky: not-recommended, paranormal, romance, YA
REVIEW: Dreamless by Josephine Angelini
2013-12-13T09:00:00+01:00
Lucia @Reading Is My Breathing
not-recommended|paranormal|romance|YA|
Newer Post Older Post Home
Subscribe to: Post Comments (Atom)