DEAR BOOK, I HATE YOU. SINCERELY, THE ANGRY READER 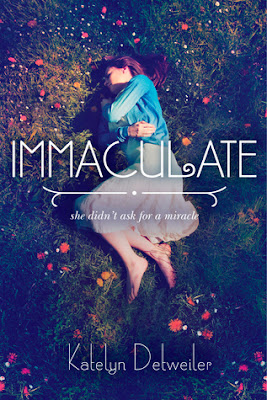 Mina is seventeen. A virgin. And pregnant.

Mina is top of her class, girlfriend to the most ambitious guy in school, able to reason and study her way through anything. But when she suddenly finds herself pregnant—despite having never had sex—her orderly world collapses. Almost nobody believes Mina’s claims of virginity. Her father assumes that her boyfriend is responsible; her boyfriend believes she must have cheated on him. As news of Mina’s story spreads, there are those who brand her a liar. There are those who brand her a heretic. And there are those who believe that miracles are possible—and that Mina’s unborn child could be the greatest miracle of all.


Immaculate had perfect premise but extremely boring execution. Lesson learned, YA magical realism genre is not for me. And don't even make me start on how shallow, underdeveloped and completely unrealistic characters were. The dialogues were artificial and cringeworthy. Heroine sounded nothing like teenager. Her voice was, in one word, unbelievable.

Writing part aside, there was another thing that completely ruined this book for me. (RANT AHEAD)

Firstly, I got angry when it was implied in all but words that not to visit OB/GYN for years is okay. Cancer prevention anyone? Is this the standard that we want to present to young girls reading this book all around the world? Do we want to make them think that it is okay and normal not to visit OB/GYN for years? Books play a role in shaping character of teenagers, is this the example we want to set up when it comes to such an important topic as their health?

Later, author made common gynecological examination sound like the most terrible experience ever that brought heroine to tears and she had to "detach herself from the room" to survive it. I mean, come on! Gynecological examination may not be the most pleasant thing and can be a bit uncomfortable for some women, but it is not painful or something that would affect you so negatively mentally. If author intended to scare teenage girls off examination that should be normal and regular part of their lives (since it is important for their health and cancer prevention) she definitely succeeded. Why, oh why would anyone publish such false and misleading scenes for teenage girls to read???

I work with gynecologists and their patients very often so I know from first-hand experience how pointlessly destructive for female health can be the disinformation and prejudices about gynecological examination. Instead of increasing awareness and fighting these prejudices, author of this book added to them heavily. And I can't condone that. Everyone, please avoid this book like the plague.

WHAT WAS THE LAST BOOK THAT MADE YOU ANGRY?

Lucia is 29 years old passionate reader and reviewer who enjoys talking about all bookish things. Currently she lives in Prague, works in business industry and dreams of starting her own publishing company. Her weakness? She can never say no to cake, coffee or good novel.
Email ThisBlogThis!Share to TwitterShare to FacebookShare to Pinterest
Štítky: not-recommended, YA
DEAR BOOK, I HATE YOU. SINCERELY, THE ANGRY READER
2018-02-26T09:00:00+01:00
Lucia @Reading Is My Breathing
not-recommended|YA|
Newer Post Older Post Home
Subscribe to: Post Comments (Atom)