Last week I was in mood for YA standalones and managed to read two distinct romance novels. One was fantasy story that I added to my TBR recently - Princess of Thorns. The other one was contemporary tale that I was very excited to read and started it as soon as it was released - I'll Meet You There. Here are my thoughts on both books. 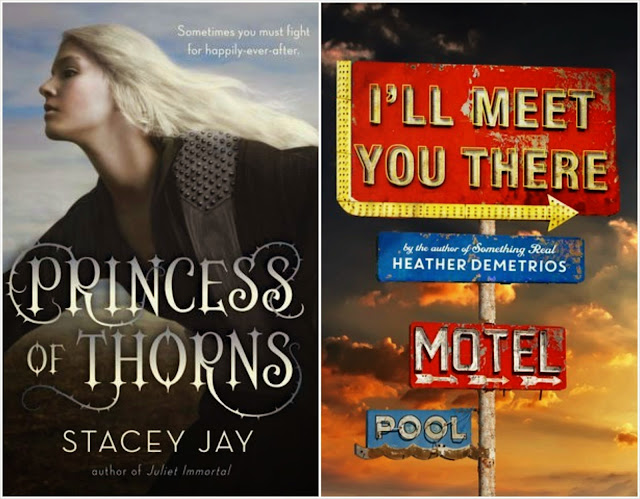 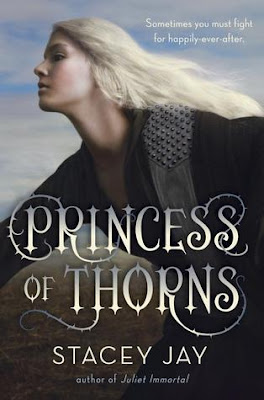 Princess of Thorns by Stacey Jay
Published by: Delacorte Press

Game of Thrones meets the Grimm's fairy tales in this twisted, fast-paced romantic fantasy-adventure about Sleeping Beauty's daughter, a warrior princess who must fight to reclaim her throne.

Though she looks like a mere mortal, Princess Aurora is a fairy blessed with enhanced strength, bravery, and mercy yet cursed to destroy the free will of any male who kisses her. Disguised as a boy, she enlists the help of the handsome but also cursed Prince Niklaas to fight legions of evil and free her brother from the ogre queen who stole Aurora's throne ten years ago.

Will Aurora triumph over evil and reach her brother before it's too late? Can Aurora and Niklaas break the curses that will otherwise forever keep them from finding their one true love?


Princess of Thorns was enjoyable read but nothing revolutionary that would sweep me off my feet. Overall, it was quite a refreshing story but it lacked the "x factor" that would make it an epic tale. I would suggest it to all those who are in the mood for quick standalone fairytale retelling story with entertaining characters and slow burn romance. 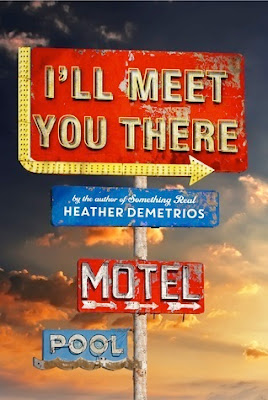 If seventeen-year-old Skylar Evans were a typical Creek View girl, her future would involve a double-wide trailer, a baby on her hip, and the graveyard shift at Taco Bell. But after graduation, the only thing standing between straightedge Skylar and art school are three minimum-wage months of summer. Skylar can taste the freedom—that is, until her mother loses her job and everything starts coming apart. Torn between her dreams and the people she loves, Skylar realizes everything she’s ever worked for is on the line.

Nineteen-year-old Josh Mitchell had a different ticket out of Creek View: the Marines. But after his leg is blown off in Afghanistan, he returns home, a shell of the cocksure boy he used to be. What brings Skylar and Josh together is working at the Paradise—a quirky motel off California’s dusty Highway 99. Despite their differences, their shared isolation turns into an unexpected friendship and soon, something deeper.


This book. I read it in one sitting and it immediately became my new favorite. I'll Meet You There is one powerful, touching, emotional, heart-breaking, spirit-lifting, goose bumps-giving story with natural characters and slow burn romance that gave me butterflies. It deals with some harsh topics, but I loved loved loved every single word of this book! Josh and Skylar will always stay dear to my heart.

Books like this are reason why I love reading so much. Put everything down, and read this unforgettable novel, guys! One small advice at the end. Do not skip acknowledgements.

(In case you are still undecided whether to read this book or not, check out more detailed reviews at Lily's Book Blog, Lost in Literature or Mostly YA Book Obsessed.)

Lucia is 29 years old passionate reader and reviewer who enjoys talking about all bookish things. Currently she lives in Prague, works in business industry and dreams of starting her own publishing company. Her weakness? She can never say no to cake, coffee or good novel.
Email ThisBlogThis!Share to TwitterShare to FacebookShare to Pinterest
Štítky: romance, standalone, two quick reviews, YA
Two Quick "YA ROMANCE" Reviews
2015-02-08T20:20:00+01:00
Lucia @Reading Is My Breathing
romance|standalone|two quick reviews|YA|
Newer Post Older Post Home
Subscribe to: Post Comments (Atom)