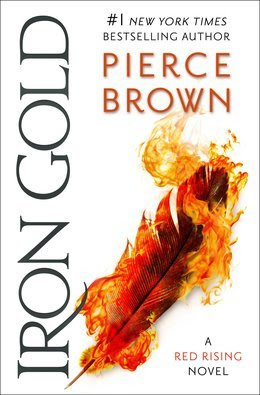 SPECTACULAR STORYTELLING! I knew before that Pierce Brown had a great way with words. But with interweaving 4 different POVs into one story, his storytelling skills reached new heights. I was spellbound from beginning to the end and as cliché as it may sound, I could not put this book down. Pierce Brown definitely knows how to make me FEEL while I read his books!

Minor spoilers for those who have not read previous books in Red Rising series, however no spoilers for Iron Gold storyline:

Once again, Darrow's POV and storyline excited and touched me the most. He is the ultimate tortured hero and author spares him nothing. After everything that Darrow sacrificed, it broke my heart to see him doubting himself and blaming himself for so many things.

"It feels like the world is doing this to us. But is it the world or is it the me? The way I am built? A breaker, not a builder after all."


Among new main characters, Lyria has become my favorite. She is direct, always does what is need to be done. She goes through so much but remains empathetic towards others. She may be naive and inexperienced but she has genuinely good heart, strong backbone and she is a person of high morals. And I have to respect her for that. Together with Darrow's POV, hers was the most emotional one.

Lysander's storyline was a fascinating one. Not because of what he did or said but because of the situations he found himself in and people he met. Unfortunately, I am not a fan of Lysander himself; there is something about him that rubs me the wrong way. But all in all, I'm very curious to see where Pierce Brown will take his character in the next book.

"Using claws of others is not brave, nor it is the same as having claws."


The last one of new characters, Ephraim, is another proof that Pierce Brown likes his characters to be complex, complicated and never ever fully good or fully bad. I'm going to repeat myself but the die is cast and I am super excited to see how Pierce Brown is going to play this game when it comes to Ephraim.

ARE YOU FAMILIAR WITH THIS SERIES?

Lucia is 29 years old passionate reader and reviewer who enjoys talking about all bookish things. Currently she lives in Prague, works in business industry and dreams of starting her own publishing company. Her weakness? She can never say no to cake, coffee or good novel.
Email ThisBlogThis!Share to TwitterShare to FacebookShare to Pinterest
Štítky: must-read, pierce brown, sci-fi
REVIEW: IRON GOLD BY PIERCE BROWN
2018-01-24T12:06:00+01:00
Lucia @Reading Is My Breathing
must-read|pierce brown|sci-fi|
Newer Post Older Post Home
Subscribe to: Post Comments (Atom)