REVIEW: EMPRESS OF A THOUSAND SKIES 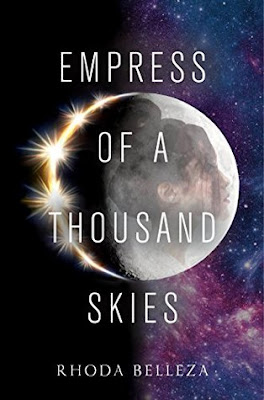 Rhee, also known as Crown Princess Rhiannon Ta’an, is the sole surviving heir to a powerful dynasty. She’ll stop at nothing to avenge her family and claim her throne.

Aly has risen above his war refugee origins to find fame as the dashing star of a DroneVision show. But when he’s falsely accused of killing Rhee, he's forced to prove his innocence to save his reputation – and his life.

With planets on the brink of war, Rhee and Aly are thrown together to confront a ruthless evil that threatens the fate of the entire galaxy.

A saga of vengeance, warfare, and the true meaning of legacy.

I am sad to say that after promising start, Empress of a Thousand Skies went donwhill pretty fast for me and I lost interest in story and characters quite early in.

It all comes back to poor storytelling. I didn’t like the way individual chapters were composed. Told in dual POV, each chapter ended with its own cliffy, then it switched to different POV with different setting and when we got back to previous POV, everything was resolved and we were just informed what had happened but never shown. In short, this book is another example of telling not showing which resulted in narrations feeling impersonal and boring to me. The only plus was that it was easy to distinguish between „voices“ of individual POVs.

My other problem was the lack of believable character transition. How was I supposed to believe that this immature childish girl is meant to be an empress of galaxy? It felt as if author was aiming to create her heroine as someone between warrior princess (typical badass YA heroine) and politics-smart (like Kestrel from The Winner’s Trilogy) but failed completely. To me, Rhee was just this sheltered girl ruled by her thoughts of revenge and blind to everything else. I don’t require perfect characters. On contrary, I love flawed ones. But reading about teenage foolishness doesn’t tickle my fancy.

I’m disappointed, I expected so much more from this book. I expected that it would present more complex world and plot on a larger scale but I was mistaken. Simply said, Empress of a Thousand Skies can’t even hold a candle to most other sci-fi books that I have read.

And the biggest disappointment? Misleading blurb! Empress and fugitive never even met. And THAT part of the blurb was the reason why I picked this book up in a first place…

HOW DO YOU FEEL ABOUT MISLEADING BLURBS?

Lucia is 29 years old passionate reader and reviewer who enjoys talking about all bookish things. Currently she lives in Prague, works in business industry and dreams of starting her own publishing company. Her weakness? She can never say no to cake, coffee or good novel.
Email ThisBlogThis!Share to TwitterShare to FacebookShare to Pinterest
Štítky: not-recommended, sci-fi, YA
REVIEW: EMPRESS OF A THOUSAND SKIES
2017-02-17T12:40:00+01:00
Lucia @Reading Is My Breathing
not-recommended|sci-fi|YA|
Newer Post Older Post Home
Subscribe to: Post Comments (Atom)